(Editor’s note: Matt Spencer is the author of several novels, including the acclaimed Deschembine trilogy, The Night and the Land, Trail of the Beast, and The Blazing Chief (forthcoming from Caliburn Press), as well as numerous short-stories and novellas. Find him online at https://mattspencerauthor.wordpress.com/, and on Twitter as @MattSpencerFSFH.) 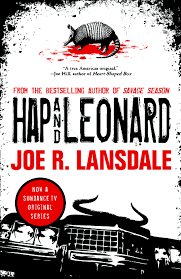 If there’s a modern author who qualifies for heir-apparent to the Golden Age of Pulp Fiction, keeping the form alive and relevant today, it’s Joe R. Lansdale. Far from a one-trick pony, Lansdale seems at home writing just about anything, from adventure, mystery, horror, sci-fi, Western, to mainstream fiction. The man refuses to pigeon-hole himself, and goes wherever the hell the muse takes him.

He sure makes it hard to pick favorites, that Crazy Uncle Joe, especially from the body-of-work of such a prolific storyteller who’s resonated with me so strongly and had such a profound impact on my own work. If you were to put a gun to my head over the matter, I’d say his talent shines brightest in his personal brand of rural East Texas-style hardboiled crime fiction. And there nowhere better than with his two recurring heroes Hap Collins and Leonard Pine.

First introduced in the short novel Savage Season (1990), this pair of Texas rough-housin’ good ol’ boys don’t fit the profile. Hap’s a white, skirt-chasing ex-hippie who spent time in jail during the Vietnam War. Leonard’s a black, gay Vietnam vet with an old-school conservative streak. The first novel opens with Hap’s ex-wife Trudy showing up from their old hippie days, to lure him back into a caper to recover a carload of bank-robbery money from the bottom of the Sabine River. From there, things go from bad to worse very quickly, through a scenario made of violent twists and turns and character relationships I won’t give away here. It’s no spoiler to say that Hap and Leonard live through it – the series is named after the eponymous buddy-duo, after all, and all of these stories are told from Hap’s first-person narration. Yet suffice it to say, Lansdale ratchets the action and tension and danger throughout the climax of the story, so hot damn, you feel like you’re right there, bleeding and sweating in the moment with these guys, almost scared to turn the next page, sharing their anxiety over whether either of them will make it out of this alive.

Lansdale has since written eight more novels of the duo, as well as numerous short-stories and novellas, consistently upping the ante every time. As Hap and Leonard grow older and more seasoned, settling into their life’s calling as semi-vigilante private investigators, Lansdale never seems to run out of ways to keep them on their toes.

Lansdale’s rough, witty workman’s prose reads extremely fast, painting people and places in broad, vivid strokes, so their dialogue fills in the rest, putting you there. Hap’s snarky, laconic narrative voice recalls that of Raymond Chandler’s Phillip Marlowe, with a down-home redneck spin, so any fan of old-school hard-boiled detective pulp should feel instantly right at home…but with a twist. See, while so much of our favorite old-school pulp yarns are tainted by outdated attitudes on race and gender and such, Lansdale confronts and addresses these social issues directly, through a thought-provoking modern lens, in ways that hurt. Lansdale’s own real-life background, as a Texas roughneck and as a Martial Arts instructor, lend the seedy situations and bare-knuckle two-fisted action-sequences an authenticity that’s impossible to fake. At the heart of it all lies the inseparable brotherhood between our two ne’er-do-well heroes. That’s what makes you care and keep turning the pages, even when shit gets so grim and gut-wrenching that you’re afraid to see what happens next. Hap and Leonard keep each other going with a rhythmic banter that rings true. They constantly jibe and rib at each other, in vulgar, hilariously offensive ways that only the closest, truest brothers-in-arms get away with talking to each other. They’re down-home hardasses who rely on their brains, hearts, and critical thinking skills, as well as their brawn and swagger. As with any iconic great adventuresome literary friendship, you’re likely to recognize shades of yourself and your own BFF in them, especially if you know what it is to get through some insane, dangerous times together.

Hap and Leonard have recently come to life on the small screen, in a Sundance TV series starring James Purefoy as Hap and Michael K Williams as Leonard, already renewed for a third. Here’s hoping the boys are here to stay with us, for a long time to come, ‘cause if you ask me, they’re the heroes we need right now.

For a great place to start, I’d suggest either the first novel, Savage Season, or the recent collection of novellas and short-stories, titled appropriately, Hap & Leonard.

Interested in writing a Pulp Appeal article for Broadswords and Blasters? Drop us a line through our contact page and let us know what you’re interested in contributing.)