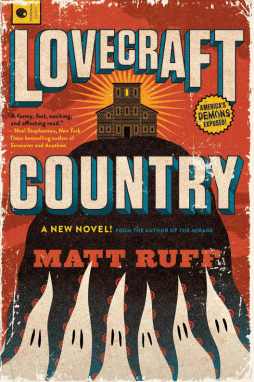 In theory, Lovecraft Country by Matt Ruff should be everything I want to read in modern horror – inspired by H.P. Lovecraft, but rejecting his outright racism. Maybe it would have, if I’d stopped reading after the first section. Instead, taken as a whole, the novel was merely okay.

Lovecraft Country, published in 2016, is the story of two black families living during the Jim Crow era, when the racist attitudes of much of America supported such awful ideas as sundown towns and anti-miscegenation laws. The main character of the first section of the novel is Atticus Turner. As the story opens, Turner’s father, Montrose, has called Atticus home from Florida, where Turner settled after ending his active duty service for the Army in Korea. When Turner gets home, after being accosted time and again by the white establishment, including being shot at by a police officer for violating a town’s sundown curfew, he finds his father missing. He enlists the help of his Uncle George, the publisher of The Safe Negro Travel Guide, a fictional analog of the real Negro Motorist Green Book, and his childhood friend, the strong-willed and resourceful Letitia, to head to Ardham, Massachusetts, his father’s destination. It’s a point of deliberate humor when Atticus first misreads the location as Lovecraft’s Arkham.

Pulp horror and science fiction permeate the world of Lovecraft Country, with much of the main cast being fans of works written by people like Edgar Rice Burroughs and H.P. Lovecraft. While they despise much of the racism that presented itself in those works, the fictional worlds those authors, and many others, created were big enough draws the characters could love the work while not forgiving or apologizing for the biases, much like Matt and I.

It’s no surprise, then, when Turner’s father is discovered imprisoned in a weird village where a cult of white necromantic sorcerers, the Order of the Ancient Dawn, is attempting to enact a ritual that will give them even more magical power than they currently possess.

It is this first section I fell in love with. The existential horror of being black Americans trying to travel from one state to another without being imprisoned or killed simply for the color of their skin is coupled with the existential horror of ages-old cults worshiping Elder Gods (though not Lovecraft’s versions) and possessing ancient magical texts.

As mentioned in the introduction, I ought to have stopped once the first section met its resolution. Sadly I did not, mostly because I was so enthusiastic about what I’d read. I really wanted the rest to match. However, as the novel went on I found myself drifting away from some of the characters, until the last section when I very nearly just stopped completely. Each chapter after the first is told from a different character’s point of view. Normally that would be fine, and many authors make use of this sort of limited omniscience to great effect. But the first section establishes a strong connection with Atticus, and I never felt as deeply attached to the other characters. That’s not to say there is nothing enjoyable about the rest of the novel, but none of it matches the heights of Atticus’ story of coming home and then attempting to rescue his father.

The book is comprised of eight novellas, each following a different character’s point of view. I’ve mentioned Atticus’ story above, which was fantastic. The stories of Ruby, Letitia’s sister who is given power to change her race in the fashion of Doctor Jekyll and Mister Hyde; Hippolyta, Uncle George’s wife and main researcher for the The Safe Negro Travel Guide, an explorer who visits a weird far-flung world with strange stars; and Montrose, a man who winds up reliving part of the Tulsa race riots while conversing with ghosts, are also particularly well done, though never quite as good as the first. I’m less enamored of the stories of Letitia, the inheritor of a haunted house; Uncle George, who puts together a group of Prince Hall Masons to steal an ancient Book of Names; and Horace, Uncle George’s son, who is stalked by a possessed doll, a la Chuckie or Talking Tina. But they’re readable, if not terribly exciting.

The last chapter, “The Mark of Cain” isn’t really horror at all. The main characters, who up until this point have been fighting nearly hopeless battles and just barely surviving, suddenly become hyper-competent masterminds, like Ocean’s Eleven, and the ending reads nothing whatsoever like its namesake author, nor the novellas before it. I was supremely disappointed with this turn, especially since I felt like Ruff did such a good job capturing the feeling of Lovecraft while updating it for modern audiences. The last chapter just doesn’t fit.

Still, Lovecraft Country is definitely worth reading. If I had to rank it on a 5 star scale, it would be a 3 overall.

As a final note, earlier this year there was talk about HBO making a Lovecraft Country TV show with Jordan Peele, fresh off his tremendously successful Get Out, but there’s been no real chatter since May.

Like Loading...
This entry was posted in Pulp Consumption and tagged fantasy, horror, Lovecraft, review. Bookmark the permalink.