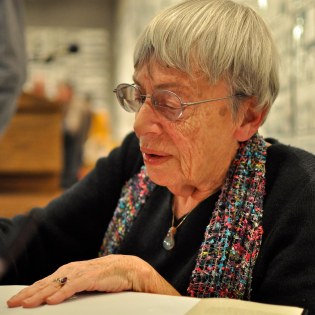 This article has been harder to write than I anticipated. That’s not just because Ursula K. Le Guin was an important writer, but because I realize that I have been remiss in my reading of her work.

First, she’s not a pulp writer. Her fiction is very definitely in the realm of socially and politically aware, deliberately composed to advance social agendas alongside the entertainment factor. I was not and am not always amenable to that. I tend to find much of that sort of writing to be polemical and I’m usually not interested in too much polemics when I’m reading for fun. That said, her work is important in the grand scheme of science fiction and fantasy, and for that she deserves accolades.

Le Guin’s work is unquestionably feminist. The modern intersectional feminist movement may not always agree because Le Guin’s earlier work had explicitly male characters exploring worlds where the patriarchy held firm control. They attempted to weave their way through those worlds without outright upending them. To some, this is an unforgivable sin and amounts to apologetics. 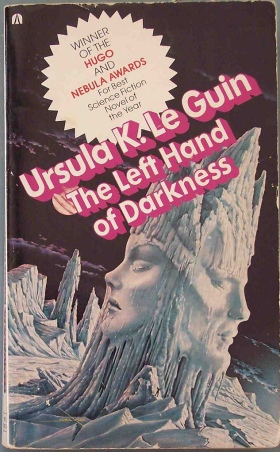 Paperback cover of
The Left Hand of Darkness

I’m not one to jump so quick on that. Authors are products of their time and the prevailing attitudes and mores of that time. This doesn’t forgive people like Lovecraft their racism, but judging the entire past based on modern moral standards reaches the height of silliness. For instance, at the time that Bill Clinton was elected President, his saxophone and sunglasses shtick was seen as progressive and representational of black minority voters. He was even called “the first black President.” You only have to look ahead 20 years and that seems positively asinine. In 20 more years there will undoubtedly be critiques of Barack Obama as betraying the black community. Indeed, such rumblings already exist.

But that’s simply revisionist history. At the time, those were major milestones, and a work like Le Guin’s The Left Hand of Darkness is such a milestone, too. In that work she deals with the problems of gender roles, postulating a far future society where not only are the roles broken apart, but the actual sexes of the species are malleable as well. Other authors, including men like Robert Heinlein[1], Joe Haldeman, Samuel R. Delany, and John Scalzi, and women like Margaret Atwood, Anne McCaffrey, Octavia Butler, and Kameron Hurley have explored similar concepts with respect to people changing genders or the implicit problems with ingrained roles determined by those genders. While Le Guin was certainly not the first to do so, the mainstream success of Left Hand made sure many more readers were exposed to it than might have otherwise. 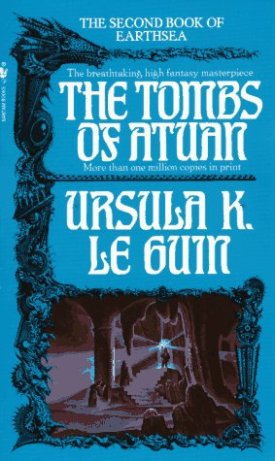 Paperback cover of
The Tombs of Atuan

Of similar importance, at least in the realm of Bildungsroman speculative fiction, are the Earthsea novels, though I confess to having read only the second one, The Tombs of Atuan. I was not particularly impressed, but I was also much younger. I’m going to take it upon myself to read the rest of them this summer during the college break.

The story of hers I’m most familiar with is also one of her shortest, “The Ones Who Walk Away from Omelas.” I use this story in both my short story literature and creative writing classes where we discuss both the craft elements of a religious or pseudo-religious parable and the ethics of a society in which suffering must exist in order for happiness to exist. The moral implications of such a society are often lost upon students at first. They feel like the people who stay in the society are evil and the ones who walk away are good, but the story resists such a black-or-white interpretation completely. In reality, the society Le Guin portrays is not so far-fetched, as those of us in first-world societies do enjoy almost all of the creature comforts and peace as the Omelans, and much of that is built upon people who do the hard labor and crap jobs[2] to which we are willfully blind. I’ll leave the rest of the English professor-y stuff for another day, but suffice to say I have spent a lot of time with this story, talking it over with students and professors and casual readers alike.

As a last note, we talk here at Broadswords and Blasters about works that influence our tastes and works that we are currently consuming. Not all of them are pulp, but each of them has shaped the way we think and read in different ways. I’m not always in a mood for socially conscious fiction, which is why I have shelves full of Dragonlance and Forgotten Realms novels alongside my definitive pulp works by icons like Robert Howard and Edgar Rice Burroughs. But that doesn’t mean there isn’t room on those shelves for the other works, or that even the pulp works aren’t themselves political. Noir works are certainly political critiques of a failing justice system, corruption, and the moral gray areas of real-world encounters. And there’s certainly room for literary analysis of all works–pulp, social sf, high-tech sf, cyberpunk, noir, superhero, literary fiction, vampire romance . . .

It behooves you all to read widely, so that at the very least you know why you love what you love when it comes to pulp. Action-centered entertainment starring proactive protagonists and antagonists with agency doing big things in the face of danger, with moral costs and changes in physical and mental well-being at play, is all key to my enjoyment of the genre, and that isn’t likely to ever go away. But sometimes it’s good to take a break and read something with a bit more heft.

[1] Unfairly categorized as a right-wing authoritarian based only on his early work. Anyone who judges Heinlein without having read Stranger in a Strange Land, Time Enough for Love, Job: A Comedy of Errors, The Number of the Beast, or any of his other works from the late 60s until his death, is simply mistaken.

[2] This is essentially the entire purpose of the Discovery Channel show Dirty Jobs, and what host Mike Rowe most wants viewers to understand.