What do you get when you remake a classic samurai movie by Akira Kurosawa, only give it an all-star Hollywood cast and set in the old West? THE MAGNIFICENT SEVEN[1]! Starring Yul Brynner, Steve McQueen, Robert Vaughn, James Coburn, Charles Bronson, Eli Wallach, and a guy who saved Frank Sinatra’s life (sorry, Brad Dexter). It also saw the debut of a young German actor by the name of Horst Buchholz.  The incredible score was composed by Elmer Bernstein and is one of the most memorable scores in Hollywood history.

This movie bridges the gap between the earlier golden age of the Hollywood Western where the lines are clearly divided between good and evil, the good guys take their time to shoot guns out of their opponents hands, and the good guys walk away clean, clearly having accomplished their objective. This movie, while it does indulge in some of that (see the opening gun fight between Chris and Vin at the graveyard) for the most part the gunplay is deadly serious.

You don’t get much more all-star cast than this.

The movie doesn’t fail to manipulate the audience. What viewer watching it doesn’t pull for the obviously outnumbered seven? Early on, it is established that Chris will do the right thing despite the odds or prevailing attitudes when he agrees to bring a Native American to a graveyard over the objections of some of the white residents of the town. A town beset by a stronger force is obligated to search for outside help, not knowing if they’ll be able to find it. 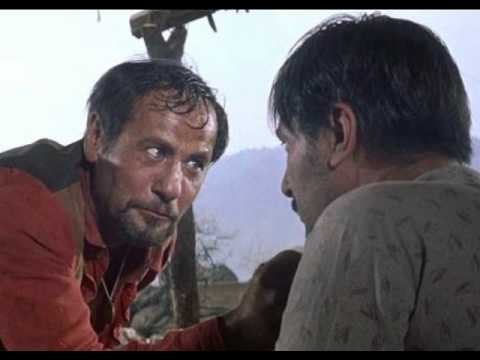 Calvera isn’t a man to mess with

What also stands out for me is the amount of character development that the movie goes into. Whether it is Bernardo O’Reilly acknowledging his mixed heritage (or his powerful speech to the boys of the village that their fathers, the farmers, are true heroes), Lee overcoming his failed nerves to enter the fight, or Chico realizing the life of a gunfighter doesn’t hold the same appeal as settling down with Petra, one of the village girls. Even Calvera, the bad guy, gets some development. It turns out he needs to raid the village because his men are short on food. So rather than raiding because he is out-and-out evil, he does it because he cares about his men. Calvera also demonstrates a level of savvy not often seen by villains when he initially convinces the seven to leave the town. The seven (with the exception of Harry Luck, who was only after a payday) decide after leaving that they can’t leave a job half-done.

When Charles Bronson ends up being the comic relief… you know you are in a badass movie.

If you are looking for inspiration for your own stories, you can do a lot worse and not much better than the original Magnificent Seven[2].

Are you an indie writer or publisher? Want your work featured here on Broadswords and Blasters? Want to have your ad appear in an issue of the magazine? Drop us a line through our contact page and let us know!

[1] Arguments can and have been made about whether it is as good a movie as Seven Samurai. That’s not the point of this article, and in fact both movies do certain things better.

[2] Yes, I am aware that there were sequels, but as a whole they pale in comparison. Likewise, the remake in 2016 fell flat for me for host of reasons, despite its stellar cast and hints of being a good movie. However, despite being cut short, the 1998 television series is fun if you can find it.