The Lies of Locke Lamora

The Republic of Thieves

What happens you decide to write about a couple of con men in a fantasy setting? In a world where magic exists, what can two “mere” thieves hope to accomplish?

Quite a bit actually.

It’s not quite what would be considered grimdark, but a little too weighty for pulp, the Gentleman Bastards fall closer to the sword-and-sorcery tradition of a Gray Mouser and Fafhrd, but with a more tightly controlled story arc than Leiber crafted for his two rogues. The two main characters, Locke Lamora and Jean Tannen, do fall within the heroic duo tradition, and while Lamora might be more readily identified as the main protagonist, Tannen gets plenty of opportunities to shine as well.

Each novel follows a similar structure in that there is the action that is taking place in the present (generally a long con of one sort or another), interspersed with whole chapter flashbacks that serve to run parallel to the main story. This serves to flesh out the main characters (as well as several of the secondary ones) while maintaining the narrative tension of the current scheme. Admittedly, the flashbacks lack some of the narrative punch that the “present” scenes possess, but only in that the reader knows the characters make it to the future dated event.

Each novel takes a slightly different approach, and almost as importantly explores a different aspect of the world Lynch is building. The first takes the reader to Cammorra, a fantasy counterpart to Venice. The second to Tal Verrar, which is what would happen if Atlantic City got to become its own nation state… and the pair gets to indulge in a bit of piracy. Finally (so far), the two end up in Karthain where they are extorted into rigging an election. 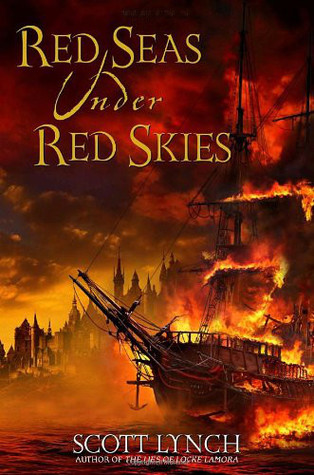 The series also shows an important facet to writing roguish characters. In order for the reader to have sympathy, you need to pit them against other characters who are even less sympathetic. For example, in RED SEAS UNDER SKIES, Tannen and Lamora take it upon themselves to utterly destroy a coastal retreat for the aristocracy after Lamora discovers the humiliating games the rich force the poor to play for their amusement. Lamora and Tannen’s main adversary is shaping up to be a sadistic wizard, sorry, Bondsmagi, who they cross paths with in the first book. How sadistic? Let’s just say he keeps a cross between a falcon and a scorpion as a pet and leave it at that. By making the villains truly bad, it plays up the sympathy the reader has for the duo, and makes you feel both their triumphs and their tragedies all the more keenly.

The series, so far, has been relatively magic light, with a few notable exceptions. Instead, the more fantastic elements are generally derived from alchemy and outright magic is closely controlled by the aforementioned Bondsmagi. That isn’t to say that that the world comes across as a poorly reskinned Europe as there enough elements such as gladiator games featuring sharks, secret religious cults, and crossbred alchemical creations to keep the world on the right side of weird.

So if you enjoy a series where the heroes are more rogue than knight, and where a good con is as important as a sharp blade, this is the series for you.