Dark Magic. Sword fights. Magical transformations. Prophecy. An evil queen and a good sorceress. A small magician whose one good trick is making a pig disappear. And brownies! (No, not those kind… but given how they act in the film…)

Of course, I am talking about the 1988 film WILLOW starring Warwick Davis, Val Kilmer, Joanne Whalley, Patricia Hayes, and the scenery chewing skills of Jean Marsh as the evil queen Bavmorda. WILLOW’s story was written by George Lucas (but notably not the screen play) and directed by Ron Howard. 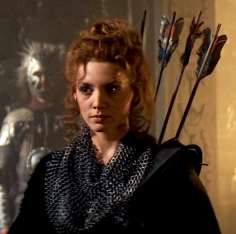 Badass redhead warrior woman? Don’t mind if I do.

The action kicks off (as so many fantasy films do), with a prophecy. A child will be born that will lead to Bavmorda’s downfall. How will people know that it is the right child? Well, they’ll be a birthmark noting it as such. Bavmorda though has fully read up on her prophecies, and decides that the best way to preempt any infant deposing her is to not only kill the infant but banish her soul so that she might never be reborn.

Before Bavmorda can kill the child, however, it is spirited away and sent downstream on a raft, because surely it won’t die of exposure that way! Luckily, the babe is discovered by a pair of dwarf… excuse me Nelwynn children, who bring it back to their village. After an attack, the village decides Willow is responsible for bringing the child back to the humans, in the main so that Willow’s village won’t be attacked. This simple plan goes South fast when Willow frees an imprisoned swordsman (Madmartigan) who promptly loses the child to a pair of brownies. A forest spirit, Cherlindrea, entrusts a wand to Willow and instructs him to find Fin Raziel who will aid the child.

The film definitely leans more to epic fantasy than sword-and-sorcery, which probably isn’t much of a surprise given that it came out in 1988. Willow as a main character is a far cry from the adventurism of Conan or the roguish wit of a Gray Mouser. He’s a simple villager who aspires to a little magic and running his farm. At the end of the movie, the evil dispatched and his services no longer required, he doesn’t join court or go on further adventures but settles back down in the same village, albeit with a bit more respect than he had when he left. Sorsha and Madmartigan, while important characters in their own right, are not the focus for the audience but act as deuteragonists, both with their own (intersecting) arcs.

It still helps to have memorable set-piece fights, though, and who can forget the magic battle between Fin Raziel and Bavmorda at the end[1]? Likewise the battle at Tir Asleen Castle where a few brave heroes have to fend off the enemy army… and some trolls… and a two-headed fire-breathing beast Willow transformed one of the trolls into. The comic relief of the brownies Franjean and Rool also keep the movie from going completely dark and there is a fair bit of physical humor (quite frequently at the expense of Madmartigan… there’s a reason why this movie was one of Val Kilmer’s breakout roles).

WILLOW goes a long way to show that there is more than one way to tell a story, and that it doesn’t always have to be the “classic” hero and that the simple farmer can be the biggest hero in the story. If you haven’t watched the movie, or if it’s been a while, you owe it to yourself to go back and watch one of the great movies from the ‘80s[2].

[1] Predating the Saruman/Gandalf fight by a solid 13 years!

[2] Even if it was nominated for two Razzies.