If you are looking for a magazine publishing the best in underground crime fiction, you would be sadly remiss passing on SWITCHBLADE. Edited by Scotch Rutherford, SWITCHBLADE fills a much needed gap in publishing hardboiled, stripped down crime fiction. Some of the shorter pieces are more vignettes than true stories, but each packs a punch like a bullet in the dark, or a knife twisting in the small of your back. Each story highlights the bad choices and worse luck that happens to those on the wrong side of the law, and there are few happy stories to be found within and even less redemption. These are stories that have you reaching for rot-gut whisky and unfiltered cigarettes, and might just have you thinking “There but for the Grace of God go I.” The magazine itself is smartly put together, with illustrations and photographs that set the tone well for each piece. The editing is rough in parts, and could probably do with another set of eyes at times, but for an indie mag the sins are minor and didn’t detract from my enjoyment of the writing. 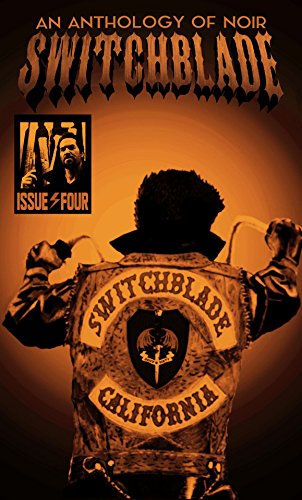 It’s not all motorcycle gangs and California.

If you’re looking for a new anthology to pick up, or if you are curious as to what the indie crime  scene looks like these days, you’d be doing yourself a disservice not checking this mag out.

Each of the following stories were quick- three pages at most. The amuse-bouche before the main course is served up.

“The Duck Blind” by Jeffrey Burton – A writer takes umbrage with a critic who passed judgment on a piece he wrote… only the critic didn’t take credit for the critique. The writer decides to take matters into his own hands. Perhaps a cautionary tale about reviewing… or at least to be careful with writers who might possess a particular set of skills.

“Cigarettes” by Henry Brock – What do you do when the union job goes bust and you’ve still got ends to meet, rent to pay? Yeah, you might decide to take a job for some unsavory types, with the understanding that you wouldn’t be asking too many questions. Sometimes though, you should look at what you’re paid to move and ask “Am I getting paid enough for this?”

“The Dark Gleaming Blade” by Aaron Majewski – A couple in Canada is trying to make a new life for themselves, away from the church that doesn’t approve of their relationship, away from the family members that would see them condemned. But sometimes running a farm leads you to look for other ways to make some money… but renting storage space to some unsavory types can prove deadly, and “No” isn’t a word they are used to hearing. But a girl on a farm knows how to swing a blade, how to follow a trail. And nothing is going to keep Beatrice from saving Sarah.

“Oh Sugar” by J.D. Graves – A pair of green eyes can lead a man to desperate acts, and when you’re robbing banks it only takes one bad day for everything to fall apart.

“Eternal Love” by Peter Dichellis – Ted receives a ransom note. Kidnappers have his wife and want $500,000, a message delivered with a burner cellphone and a blood-smeared note. Can he raise the cash? How much is his love worth, and does his wife love him equally in return?

Longer and more developed than the previous entries, these have the reader coming away with the need of a hot shower to wash the grime off. All are well written, a testament to Rutherford’s eye for a story and the writers’ talent at getting to the worst of the human condition.

“Seen One Seen ‘Em All” by Pearce Hansen – A guy on the downward spiral has a plan to score some quick cash. But when he gets picked up by the police, that’s the end of the road… isn’t it? Sometimes second chances happen in spite of ourselves, but end of the day someone’s got to pay the price.

“Extreme Hunting” by Nick Manzolillo – A plan to ambush a couple of mobsters goes horribly awry. This story left me with more questions than answers and unsure of what side everyone is on. At the end of the day though, a man’s loyalty is to himself first, but the pay out isn’t always what you hope it is.

“The Herart Handshake” by Max Sheridan- A veteran who drinks to forget falls in with a couple of extremely disreputable types. They appreciate his skill with a knife and his seeming obliviousness. The problem is though, that there is still a hint of the man he was, and he might not agree with everything they want him to do.

“Doch das Meser seiht man nicht” by Tais Teng – A Depression era story about a son missing his dad and finding he’s got a certain skill with a blade. An excellent take on Mack the Knife from the Three Penny Opera, and a gut punch to anyone out there trying to connect with their fathers. Not all legacies are worth pursuing.

“Organ Trade Off” by Diana Deverell – A number of double and triple crosses in this story of sibling rivalry and corporate espionage. The gambling piece was nicely done, as was the initial set up. This is one of the stories that benefits from being read more than once, and the twist, though unexpected perfectly follows the rest of the story.

“Sunrise at the Devil’s Pulpit” by Mike Derochick- A couple in love. A guy in a trunk. And when you’re in love, there are some questions that you don’t ask.

“Tumblr Girls” by Lisa Douglas – What’s attention worth to a girl? How much can you put on display and still be safe? How much danger are you willing to put yourself in? This story explores the dark side of internet fame, and what kind of cost it might exact.

“So Much Love” by Keith Rawson – This one is less a story and more a character study in a corrupt judge, and how someone who can seem to be the most upstanding member of society can in truth be the rotten core at the heart of it. Rawson’s Judge Knot is less a hanging judge, and more the worst thing going in his area. It’s the kind of story that makes you consider your local politicians in a whole new light.

“White Powder, Black Leather, Gray Badges” by A.B. Patterson – What’s an ex-cop to do in Australia? Well, there’s always picking up work for a biker gang, and Harry Kenmare isn’t one to turn a paycheck down. The job’s simple too, just a few photographs. But when an opportunity to go above and beyond presents itself, well, Harry’s not about to count the teeth of the gift horse, is he? Especially if there’s a chance he can get some personal payback out of it at the same time.

Switchblade #4 is available at Amazon in both kindle and POD formats.