Bob Clark’s[1] Black Christmas is a 1974 slasher flick widely considered to be one of the inspirations for John Carpenter’s masterpiece Halloween. While it is not the first of the slasher flicks, it is early enough to have had a profound impact on the slasher films that came after it. 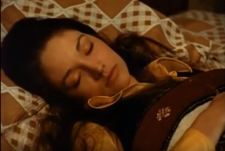 The movie stars Olivia Hussey,[2] who was already famous from her role as Juliet in Franco Zeffirelli’s great interpretation of Romeo and Juliet, which I consider to be one of Shakespeare’s worst plays (with the exception of the character Mercutio, who I love). Notable supporting actors include Margot Kidder, Keir Dullea, and John Saxon, all of whom reached their biggest mainstream successes in genre films. Kidder was, of course, Lois Lane in Richard Donner’s Superman. Dullea’s most famous role is David Bowman (Dave) in Stanley Kubrick’s 2001: A Space Odyssey. And Saxon has acted in a ton of films and tv projects, but the ones with perhaps the widest reach are Bruce Lee’s Enter the Dragon and Wes Craven’s A Nightmare on Elm Street.

Black Christmas is based on the old urban legend of The Babysitter and The Man Upstairs in which a babysitter gets a series of prank calls only to be informed by the police the calls are coming from inside the house. Since the movie came out 44 years ago, I’m not going to avoid spoilers. The film starts with a third-person shot of a sorority house and the beginnings of a Christmas party before shifting to a first-person camera shot that follows as a man secretly enters the sorority house and sets up shop in the attic. The girls of the sorority house are all murdered during the course of the film until the moment when police trace the call to inside the house. They call the main character Jess (Hussey) and tell her to get out, but Jess stays to go get her friends because she doesn’t yet know she’s the final girl. Because of some of the things the killer says in his prank calls, Jess thinks the killer is her boyfriend Peter (Dullea). After being chased around the house, she takes refuge in the basement. Peter shows up because he heard her screaming, but she lashes out and beats him to death. The police find Jess and Peter, but not the bodies of her friends or the real killer. The cops pin the murders on Peter, and as far as they’re concerned, that’s the end of the story. The real killer is still holed up in the sorority house attic with his trophy corpses. The film credits roll as a phone rings.

People who want closure will no doubt find this ending maddening. The killer is still loose, we don’t know what his motivations are, and, worst of all, we don’t even know who he is! There’s no neat bow tying everything up a nicely and removing the disquiet from viewers’ hearts. It’s this aspect of the film that elevates it above many other slasher films. Even though I’ll defend to the death Friday the 13th as my favorite slasher of all time (in no small part because I grew up in the town where it was shot, albeit I moved there 10 years after it was made), Black Christmas is the better film. Black Christmas’ deliberately open ending may certainly have its detractors, but they’re probably the same people bothered by the sudden cut to black at the end of The Sopranos, angry at the wobbling (or not?) spinning top at the end of Inception, or obsessing over whether Deckard is a Replicant in the original Blade Runner.[3] If art reflects life, then ambiguity at the end is the only real answer. That’s unsettling, maybe, but nothing about our lives is definitive. Not even what we hear when internet memes make us listen to words on repeat and share them with the world.[4]

Some of the tropes explored in this film are the injection of humor juxtaposed directly with serious horror, the first-person camera from the killer’s POV, location based serial killing, and holiday/seasonal settings, all of which John Carpenter borrowed for Halloween.[5] The slasher genre in general has borrowed many of these techniques. It’s not like Black Christmas was particularly original in using these or other film techniques (like oblique angles, zooms/pans/cut and discordant music) but the way in which they are combined was relatively new for American cinema. Italian giallo films by directors such as Mario Bava and Dario Argento had either developed or expanded most of these in imitation of American mystery/noir directors like Alfred Hitchcock. In fact, giallo as an art genre is the Italian version of pulp, down to translating and interpreting great works by people like Raymond Chandler, Ellery Queen, and Ed McBain, mainstays of mystery pulp.

Slasher movies are definitely pulp. Some may have arthouse aspirations, but even the best of them have grindhouse cores.

[1]Bob Clark is maybe more famous for his lighter-hearted Christmas movie A Christmas Story. You know, the one with the Red Ryder BB Gun, the Italian leg lamp, and “You’ll shoot your eye out.” However, Clark also wrote and directed the teen sex comedy Porky’s.

[2] She was also in Stephen King’s It, the 1990 tv miniseries starring as Audra, Bill Denbrough’s wife, the one who is caught by It and sent into catatonia after seeing the deadlights. True fans need no more information. The rest of you should read the book. I suppose you could watch the miniseries, but if you’ve seen the more recent movie adaptation, I don’t expect you to enjoy the made-for-tv version.

[3] I love the ambiguity, but I’m also 100% convinced Tony and his family are murdered, Cobb’s reality isn’t the actual one but he has chosen to stay in this version, and Deckard is a Replicant who could be (and likely has been) replaced by an exact duplicate many times over.

[4] After a quick consultation with Matt, I can confirm we here at Broadswords and Blasters are in the “Laurel” camp–because that’s what’s being said.

[5] Arguably Halloween is the better film, what with Hussey’s screen-chewing over-acting bordering on unwatchable, which makes Kidder’s attempts at scenery mastication seem pale by comparison.