Arguably one of the greatest noir films in existence, CHINATOWN exemplifies the best of the genre. Jake Gittes isn’t what anyone would consider to be a typical hero. He’s ex-police turned private eye, more interested in making a buck than seeing justice done. He’s hired by someone claiming to be Evelyn Mulwray, the wife of the city’s water commissioner. Only a simple job turns out to be not so simple when Mrs. Mulwray turns out not to be Mrs. Mulwray and the water commissioner ends up dead.

What follows is an excellent example of crafting plot and counter plot, of showing the not only the big picture plot elements (the water shortage and its cause), but the personal elements as well. Jake, while not what anyone would call a knight-in-shining-armor does come to care for the real Evelyn, which makes the ending even more of a gut punch at the end. It’s the idea that the hero is so low on the totem pole, so powerless in the face of evil, that the villain doesn’t even bother to have him killed because there is literally nothing Jake can do to get to him. 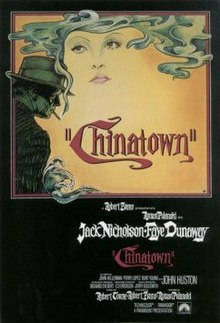 The character of Noah Cross, played by John Huston, is quite possibly one of the evilest villains to grace the screen. He’s not driven by a need for money, or even greed, but simply because he has so much money that he can get away with whatever he wants. Unshackled by any sort of morality, he is able to take what he wants without repercussion[1]. That includes raping his daughter, forcing her to have his child, and possibly raping the granddaughter as well. If anything, his motivation is to be able to shape the future, simply because he has enough money to make it happen.

In many ways, this film goes in the opposite direction of many of its hardboiled predecessors. Jake Gittes isn’t able to get the real villain in the end. Evelyn Mulwray isn’t a femme fatale but ends up the victim. Cross doesn’t face justice of one kind or another but disappears with his granddaughter. Even the concept of the hard-boiled detective being on some side of good is undermined, when it is shown that his client Curly beats his wife as a direct result of Gittes showing Curly the pictures proving his wife’s infidelity. Perhaps most telling, is that if Jake had done as little as possible, had steered clear of the case completely then it is possible Evelyn and her daughter could have escaped LA and her father’s clutches. Unfortunately for all involved, Jake didn’t, quite simply making everything worse for everyone but Cross.

The movie is also an excellent example of how noir doesn’t have to be all rain slicked streets and night time rendezvous. Much of the film makes use of California’s sunny climes, making a contrast between the sun-drenched setting and the darkness of the characters and acts taking place.

So if you haven’t watched it in a while, now might be good time to revisit what is easily one of the best film noir movies in existence, and one that rewards rewatching.

[1] There is a lesser known and regarded sequel THE TWO JAKES that Nicholson directed in 1990 that gives a better sense of closure for the characters, but if you only watch CHINATOWN,

Like Loading...
This entry was posted in Pulp Consumption and tagged chinatown, film noir, jack nicholson, neo-noir. Bookmark the permalink.