Past contributor and friend of the mag Matt Spencer has a brand spanking new anthology out this month, and we were lucky enough to get our hands on an ARC. The collection is a mix of horror and fantasy, and the stories occasionally blur the line between the two. His dialogue and narrative is often stripped down and raw, provocative and profane. Spencer is more Clive Barker than Stephen King, and closer to Robert E. Howard and Joe Abercrombie in his fantasy than a George R.R. Martin. If this is your first time reading him, it will be like getting hit in the face with a bucket of ice water. If you’ve read him before, well, you already have an idea as to what you are in for, don’t you? 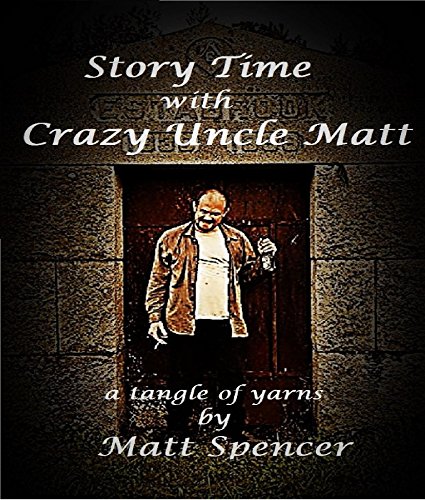 “The Room Above the Bar on River Street”: A dive bar, a man doing a favor, and a bit of darkness looking to make its way into our world. If you’ve never read anything by Spencer and this is your first exposure, it will definitely set the tone for the rest of your experience. This is cosmic horror meets blue collar working class in the best possible way.

“Kids Say the Weirdest Things”: A young boy tells his neighbor all about the Church service he attended back in the woods, but as the story goes on, the narrator realizes that this wasn’t quite your ordinary Sunday service.

“No One Rides for Free”: A fun tale of hot-rodding vampires and the people they associate with. Not all monsters are blood sucking fiends though, and you’ve got to be careful who you decide to hook up with on the lonely road.

“Have Some Dragon’s Blood”: A strange shop, a mysterious curator, and a history lesson on incense. This might be the most surreal story in this collection and moves somewhere between urban fantasy and sword and sorcery. I honestly would have liked a bit more cohesion to this story, as it wasn’t clear to me exactly what the stakes of the story were and I felt the story left off right when it was about to get interesting.

“Paulie, Ronnie, and Michelle”: A letter from an ex which goes from “Hey, how are you? We should catch up,” to deeply weird in the space of the story. An interesting way to tell the tale, and you feel the madness creeping around the edges of the story. The only downside is the reader is left with no resolution, but in this case that adds rather than detracts from the overall piece.

“Lambs of Slaughter in Blue and Gold”: A ghost story wrapped in a revenge tale, and of the dark secrets a small town might keep locked away.

“Dead Men, Dead Dogs, Tasty Bacon” : The tale could act like the prelude to a zombie apocalypse and how one might start… or be barely averted.

“Just Chew Your Way Out”:  If grindhouse fantasy was a thing, this story would be it. Blood, action, and betrayals are the hallmarks of this story and with one of the most sympathetic villains I’ve encountered in quite some time. This is a cathartic read that might just have you questioning who the hero really is, or whether there was ever a hero to begin with.

“Useful Instincts”: A man meets his new neighbor, only there’s more going on then what he expects… and it’s all tied to a job he had in a soap factory. But when you keep yourself sharp as a matter of course, those useful instincts come in handy. It’s also a good example of a story where past decisions influence the current action in a very direct way.

“Island of Skulls”: This was the story published in the first two issues of Broadswords and Blasters. Tia and Ketz are twins who are equally good at fighting and getting into trouble. And when an old evil starts to show itself again, sometime getting into trouble is the only course of action. Speaking of action, this story drives through hard and fast, and really is best when read straight through in one sitting to get the best impact.

“The Reverend”: A much more modern horror story, about power dynamics and the dangers that live in the land. The biggest problem with the story is that the narrator is clearly telling the story with some space between the narration and the events of the story, which slightly detracts from the tension the story otherwise holds.

“The Proper Word is Blackmail”: If you haven’t read any other of Spencer’s Frederick Hawthorne tales, this is a good introduction to the occult investigator. Closer to a Victorian-era Sandman Slim then say Harry Dresden, Hawthorne is very much his own man. What starts as an abduction turns into an investigation into star cults, blackmail, and secrets that some people would pay handsomely to keep secret.

“Nagga Mountain Blues”: A story about falling in love with the wrong kind of person, about refugees trying to fit in, and the cost of war. About how blood calls to blood, and the cost of trying to get a bit of vengeance. A fitting close out to the collection.

In closing, if you like your fiction bloody, gritty, and raw, this is a collection you are going to want to pick up. It is available on Amazon in both kindle and paperback. You can follow Spencer on Twitter and Facebook.