Clash of the Titans is an epic tale of Olympian gods, mythological monsters and heroic mortals. Released in 1981, it stars Laurence Olivier as Zeus (Spartacus, 1960), Harry Hamlin as Perseus, (who later goes on to star in LA LAW), Maggie Smith as Thetis (Downton Abbey), and Ursula Andress as Aphrodite (who only has one line).

The movie opens with Acrisius, King of Argos, condemning his daughter, Danae and her infant son Perseus to a horrible death by throwing them into a wooden trunk/coffin and tossing it into the ocean.  Zeus had previously visited Danae and their lovemaking resulted in Perseus, so Zeus ensures they are deposited safely on a beach where they can live happily ever after. Zeus then kills Acrisius and orders Poseidon to ‘Let Loose the Kraken”, a mythical sea-creature similar to Godzilla, who destroys the kingdom of Argos.

Years later, he punishes Calibos, the son of Thetis, for many atrocities such as hunting several wild creatures – including Zeus’ winged horses – to near extinction. He transforms the once handsome Calibos into a hideous monster with horns, a tail, and a cloven hoof. Thetis seeks revenge by transporting Perseus, now a grown man, to Joppa. He eventually reaches the city and speaks to an incredibly chatty guard who tells him everything there is to know about what’s going on in Joppa. Any man can present himself for the chance to marry the beautiful, Andromeda, once betrothed to Calibos, however, the suitor must answer a mysterious riddle, which changes with every suitor, and failure to solve the riddle results in a fiery death. 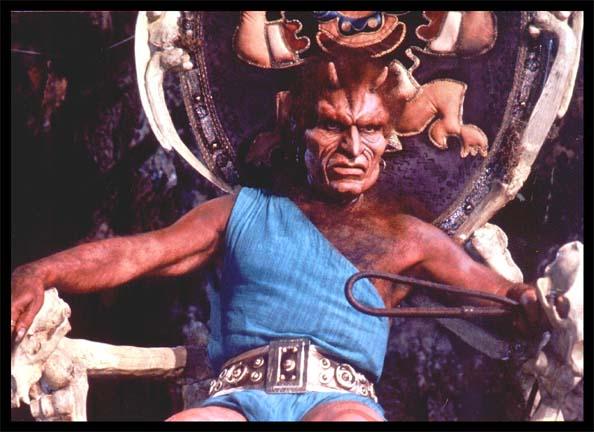 Calibos works on his villainous slouch.

When Perseus solves the riddle, the people of Joppa are delighted. Things seemed to be looking up for Zeus’ son, until his new mother-in-law, Cassiopeia, insults the goddess Thetis by claiming Andromeda is more beautiful than the goddess herself. Thetis demands Cassiopeia sacrifice Andromeda to the Kraken or she’ll destroy the city. This is where the adventure really begins and Perseus will face Stygian witches, the two headed dog dioskilos, the gorgon Medusa, giant scorpions, Calibos, as well as the Kraken in an attempt to save Andromeda.

The Kraken prepares to feast.

Clash of the Titans is classic sword and sorcery; the story draws heavily from mythology and we have a sword-wielding hero. When Perseus is stranded in Joppa, Zeus orders the goddesses to gift him with magically imbued weapons. Perseus receives a sword from Aphrodite that can slice through marble, a helmet from Athena, that renders the wearer invisible (this will later aid in him capturing Pegasus), and a shield from Hera. The shield projects an image of Zeus who tells Perseus it will save his life one day and that Perseus must find and fulfil his destiny. There’s magic, gods, mythical creatures, swords, an epic quest, a virgin sacrifice. It’s the ultimate battle of good versus evil.

In an interview with visual effects artist and co-producer, Ray Harryhausen, he explains how he was bored of monsters destroying cities and prefers the past to the future, which is why mythology appealed.

“Cinema was made for fantasy, not normal mundane things.” – Ray Harryhausen.

Filming locations were over England and Europe. The opening scene was filmed in Cornwell and crew had to wait until there was a storm. Flood scenes of Argos were filmed in Malta, the rocky formations around the Stygian witches’ lair were filmed in Antequera, Spain and the outside of Medusa’s temple was in Southern Italy. Interestingly, some scenes from Jason and the Argonauts, (also featuring Harryhausen’s stop-motion monsters), were filmed there too. The final epic battle with the Kraken is in Malta again.

Most of the special effects rely quite effectively on shadow imagery and stop-motion animation using Harryhausen’s hand-made monsters, but considering it was filmed in 1981, I think it’s pretty good. And so did audiences at the time. Clash of the Titans grossed $41 million dollars, making it the eleventh highest grossing film of 1981.

In Greek mythology, Dioskilos has three heads but only two in the movie because Harryhausen thought it’d look too awkward with three during the fight scenes.

The Kraken is not technically part of Greek mythology, there is a Greek mythological sea-creature called the Leviathan, but the Kraken comes from Norway and is a giant sea-creature similar to an octopus or crab. Calibos is reportedly based on a character from ‘The Tempest’, named Caliban.

The mechanical-owl Bubo also not from mythology, was added to the movie for comic relief and to give the audience a chance to catch their breath between epic battles. Bubo makes a ‘guest appearance’ in the 2010 version when Perseus (Sam Worthington), comes across him while looking for weapons in the armory. The remake has spectacular special effects, as do all movies made with CGI, but it will never take the place of the original in my heart. And at the risk of sounding like my dad; they don’t make movies like they used too.

We’d be dubious about the use of a mechanical owl as well.

(Editor:  Interested in writing a Pulp Appeal article for Broadswords and Blasters? Drop us a line through our contact page and let us know what you’re interested in contributing.)