Switchblade continues its run as an excellent venue for short noir and crime fiction and issue six is no exception. These stories read like a lone saxophone playing in the night, following people with bad luck, who’ve made bad decisions, and who took the easy way much to their regret. My hat’s off to Scotch Rutherford for curating another excellent batch of stories. I know I’ve said it before, but anyone who thinks the short story form is old and tired hasn’t been paying attention to what’s going on out there. There is a tremendous amount of talent that is going unnoticed and unremarked. So do yourself a favor, pick up an issue. Give it a read. See what you’ve been missing. 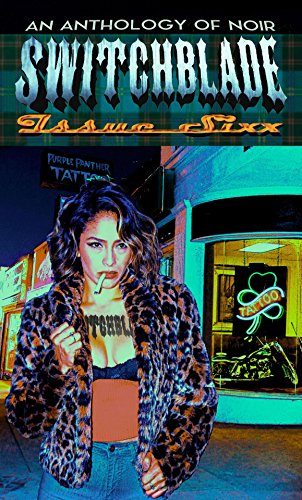 You wished your covers looked half this good.

I also appreciate the artwork that Rutherford peppers the interior with, be it black and white street photos, vintage ads, or women who’d sooner cut you then give you the time of day. It fills out the magazine nicely and lends atmosphere to each piece.

“Seattle by William R. Soldan is a paean to loss and addiction, where music meets desperation and yesterday’s dreams turn into today’s recriminations. This is the kind of poem smoky, low ceilinged bars are meant for, but the edges are more polished than say Burkowski or Burroughs.

“Down Payment” by George Garnet is flash the way SWITCHBLADE likes it. In and out to tell the story, keeping it raw but keeping it human. It’s about what happens when you take options away from people and they react in maybe the last way you’d suspect. But it’s also about loss of innocence, and how adults can destroy childhoods, especially when they start going down a long and lonely path.

“Hooked” by Aidan Thorn. A fresh take on fidelity and bravery, as what happens to a man after he visits a prostitute. I can say with certainty that while the bulk of the story was unsurprising, the reveal at the end was.

“On the Way Home” By Rex Weiner. A man wants to go home, but he’s interrupted by hos coworker Walter, who tells a series of short, sharp vignettes: scenes from his own life and the mistakes made when assumptions take over. Not quite a story, the real strength in the piece comes through at the end, with the man sitting in his car, thinking about his own what-could-have-beens.

“Cold Comfort” by John Bosworth. A different sort of tale regarding infidelity and the darker desires that some men (and women) have. About the price indulging those desires might inflict. And what kind of people would crawl out of the woodwork to indulge them.

“The Vice Aisle” by Mike Payne. A night shift manager leads a wild double life of swinger’s clubs, drugs, and crime. Turns out working the night shift is a gateway into all sorts of illicit activity, especially in a declining neighborhood and where everyone “knows a guy.” But what happens when automation starts taking over, when that way of life is threatened? All that changes when the store is subjected to an armed robbery… but what do they ants with the shelf-stocking robots?

“Dead Men Tell Tales” by Jim Thomsen. Stop me if you’ve heard this one before. A hit man waits for his target at hi target’s home. He gets there. The hitman shoots him. Hitman gets paid. Only, that’s not quite how this story goes. This hitman’s terminal with cancer. The mark is a college-educated young man whose ex-father-in-law wants disappeared. They sit. They talk over a beer. So, when does empathy win over professionalism? And what form might that take? Easily one of my favorite stories from this collection, Mr. Thomsen is someone to keep an eye out for.

“The Usher” by E.F. Sweetman. I’ve been thinking about this story a lot since I’ve read it. A story where people with money and power are able to take advantage of those who don’t. What happens when you want to hang with the cool crowd, and what that’ll cost you. What it might cost in human life. Sweetman does an excellent job of channeling the back streets of Boston and its seedier side, and anyone familiar with New England has to admire the authenticity she injects into her writing.

“Chowda” By Travis Richardson. Two men are poisoned, but only one of them dies. The survivor takes it on himself to figure out who was behind it. Not who put the poison in the chowda necessarily, but who was the motivating factor… and the reason they did it. A strong story that goes into how the past impacts our present, and bad mistakes can snowball into disasters.

“Implement of Destruction” by Rusty Barnes. Kraj is a legbreaker for Tricky Ricky, a loan shark. Sure, it’s not his only job (he also bounces at a local club), but it’s the one that pays most of his bills. This story is unique in that you don’t often see stories from the point of view of a character who’d be little more than an extra in most other stories, showing the potential for telling the stories from fresh perspectives. The action in this piece is short, sharp, and dramatic. Not a surprise coming from Rusty Barnes (editor at TOUGH), but damn if this story doesn’t sing.

“Lost Girl” by Scot Carpenter is a dark and twisted tale of sex trafficking, big money, and violence. The main character is as ruthless as they come and as self-centered a morality as I’ve seen in literature. That said, he doesn’t have any real illusions as to his own evil, acknowledging that he is out for himself first and foremost. And for the record, I might not look at a bottle of hot sauce quite the same way again.

“Road Rage” by Danny Sophabismay. Hannah’s at the end of her line: an addict, pregnant, and in the hole to her usually supplier. But things start to change when she gets cut off by a Suburban, and she comes by some illicit cash. But when your luck runs bad for as long as it does, can even a small upswing make a difference?

“The Bargain” by Tom Barlow. A car auction can be a great thing. Four wheels and an engine can mean freedom, or at least the start out of a deep hole. But when Tanya discovers three kilos of heroin in her new ride, it’s the start of a downward spiral as she looks to unload it. But some habits are easy to slip into, and at the end of the day a bad bargain is worse than no bargain at all.

“The Magician’s Left Hand” by Tais Teng. A hitman. A mysterious client. When you kill for a living, it becomes hard to remember them all, but the wreckage you leave behind in life has a way of washing back up, especially when you don’t expect it to.

“Violet” by Evelyn Deshane. This read like the odd duck out in the collection as it dealt with a snuff film, a video store clerk, and the idea of who we are and how much we shape ourselves around the idea of other people. This one also blurred the line between noir and supernatural in a way that I’m not used to reading in Switchblade. It’s probably the most heartbreaking story in the collection.