Has it been a week already? Okay then, it’s time to continue Castlevania franchise nerd-out. As I said last week, this article ballooned on me. While you could conceivably read this Pulp Appeal cold, it might be best if you went back and read last week’s, either for the first time or as a refresher for today’s article. As with last week, I’m linking you to a soundtrack to listen to while you read, but it will only work if you have Amazon Prime, as the music is proprietary and not under weird video game music laws. Honestly, Trevor Morris has made some great music for filmed properties, and the soundtrack is worth purchasing.

Last week I spent time talking about the inspiration behind Castlevania, the history of the first three games in the series, and a bit about their impact on video games that came after. This week I’m going to tackle the most recent iteration of the franchise, the Netflix animated series. But first, more history!

Castlevania as an intellectual property is a mish-mash of vampire lore, and includes all the horror-adjacent properties from myth and legend. It even ropes in an original contemporary for Dracula, Carmilla. Actually the novella Carmilla predates Stoker’s novel, which makes her legend as a lesbian seductress and master vampire even stranger when reflecting back on historical standards of sexuality, publication, and censorship, except that if you read it, you’ll see the author, Joseph Sheridan Le Fanu (another Irish novelist!) does not empathize with Carmilla and sees her sexuality as a deviant threat. In any case, Carmilla shows up as an enemy in Simon’s Quest and some of the later games, as Castlevania has no qualms about sucking in any public domain vampire lore and bleeding it dry.

Since Dracula and its contemporaries are clearly in the public domain, their use in video games is clearly fine from a legal standpoint, but making Castlevania itself into a tv series is another beast altogether. Video games make poor movies for the most part, although much of that could be the fault of the one director who ruined it for many other people, Uwe Boll. There are some exceptions, but even listing them might be contentious. Suffice to say, I liked Angelina Jolie’s Lara Croft, but that’s neither here nor there. Castlevania, as I was saying, is a complex property to do justice to all its aspects, and choosing which of the games to use as a tentpole for a film interpretation was bound to cause consternation.

What’s surprising is when it came down to the actual interpretation, Netflix seems to have chosen the most solid, strongest part of the franchise to rest its initial run, Castlevania 3: Dracula’s Curse. I’m not sure why I find that so surprising given the general high level of quality for many Netflix produced shows, but it is for some reason. Anyway, Dracula’s Curse is not only the game series’ prequel, thus setting the stage for any later stories, but also one of the more complex storylines to follow, if you can consider 2D 8-bit platformers as having stories. But before we dissect the plot, let’s talk about the writer, Warren Ellis. 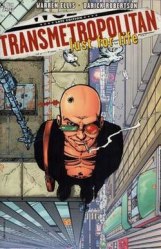 I am a comic book nerd, too. Right, like that wasn’t obvious. And as a good comic book nerd, I’ve read Warren Ellis comic books for about two decades. Ellis is the writer behind the superhero deconstruction The Authority (not my favorite, if I’m honest), and also Transmetropolitan, the cyberpunk-dystopian homage to Hunter S. Thompson, perhaps one of the most important literary comic books series this side of Neil Gaiman’s Sandman. I read both of those books after I’d discovered Ellis in the pages of Hellblazer, the comic book exploration of John Constantine, a noir-esque wizard first created by Alan Moore during his run on Swamp Thing. Ellis’ portrayal of Constantine was captivating, so I followed his trail through the industry whenever I had disposable income to throw at him, including his successful visionary web-comic FreakAngels.

When I first heard Ellis was attached to a Castlevania film property, I was all ears. But those inklings started in the mid-2000s and nothing came of it for a long time. Then last year all of a sudden Netflix dropped four episodes, and those episodes simply blew my mind. I admit that I was a bit taken aback by the first time the word “fuck” was uttered in the show, and felt like it was unnecessary. Then I saw Warren Ellis’ name in the credits and it made a lot more sense. I still think it may be a bit of overkill for the property of Castlevania, but I’ll allow it.[1] Then the series went dark for over a year. When the “second season” dropped just a few weeks ago at the end of October, I was pleasantly surprised, but didn’t have the time immediately to tackle it, so I watched it all through two weeks later.

Beware: spoilers may abound from here going forward, so if you care about that sort of thing, or would rather watch the show without such foreknowledge, you might want to just go watch the show and then come back. We’ll still be here. I’m not going to do a complete episode by episode breakdown, but the first four episodes set the stage for the rest of the series. 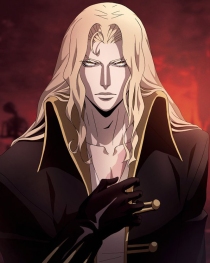 In the first episode, a woman seeks out Dracula in order to learn from him. There’s an indication that because of Dracula’s very long life he is in possession of advanced science, including medical advances that seem to parallel modern medicine, but the setting is medieval Europe, so there’s a disconnect here that I don’t quite understand. The woman, Lisa, and Dracula form a relationship, the result of which is Alucard, but we don’t see this until later in the series. What we do see is Lisa being arrested by the Catholic church, accused of witchcraft for her medical knowledge, and then burned at the stake by the archbishop. Dracula vows vengeance, which he enacts a year later, launching a full-scale assault on humanity, feeling as though all of humanity must pay for the church’s actions.

The second episode introduces Trevor Belmont, the last survivor of an ancient vampire hunting clan, who is wasting away in a bar, drinking through his troubles. He fights off a wave of the undead, corrupted humans, and demonic entities who make up a portion of Dracula’s army. Along the way he meets up with a sect of wizards and agrees to help them find one of their number who was lost on a mission to awaken a legendary sleeping soldier who could help them fight Dracula. This transitions into the third episode, where Trevor comes across the lost wizard, who was frozen by a cyclops. Trevor kills the cyclops and in doing so awakens the wizard who turns out to be a beautiful young woman named Sypha. After confronting the archbishop, who thinks Sypha and the rest of her wizard enclave are to blame for Dracula’s attacks, Trevor and Sypha fight off another night-time assault by the undead minions. They fall into the catacombs beneath the city and accidentally awaken the legendary sleeping soldier. This turns out to be Alucard, and after a brief fight between Trevor and Alucard, the two fight to a standstill and begrudgingly accept each other’s company on the quest to fight Dracula.

If any of that sounds familiar, it should, because it’s effectively the first five stages of Castlevania 3: Dracula’s Curse, and so the show introduces three of the four playable characters from the game.

The second season breaks from established game canon, which is both welcome and necessary, and introduces Dracula’s vampire generals, who include the Viking Godbrand and Carmilla, who I talked about above. While I have no problems spoiling the first season of the series, here’s where I’ll exercise my judgment and tell you just to watch it yourself.

The action sequences are animated with surprising precision, considering how complex the movements of the characters and their weapons are. The subplots and individual machinations of characters as they seek to work together, undermine each other, or carry out their own plans are more complex than even the fight scenes, and make the series fun to watch closely. Dracula’s generals and vampire allies are given depth, and Dracula himself is shown in a sympathetic enough light that viewers may end up feeling sorry for him, even while rooting for Trevor, Sypha, and Alucard.

The big fight scene is one I won’t describe other than to tell you it is amazing, and if you are a fan of the video game series you’ll get an even bigger thrill when a certain iconic song finally plays as background music. The direct connection is nice to hear, especially since it was the one missing piece for me. I’m hopeful there will be more inclusion of video game music going forward, especially if it’s done as well as it is here.

[1] As if Netflix needs my approval.

Like Loading...
This entry was posted in Pulp Appeal and tagged castlevania, dracula, Netflix, television, video game. Bookmark the permalink.